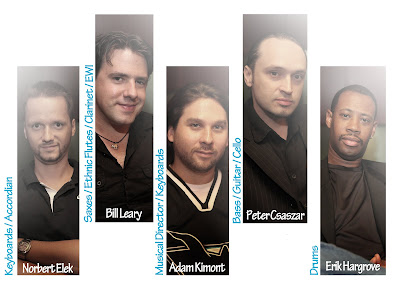 What is it like to play ‘live’ for a circus theatrical like this?
Adam: It helps to have a background in improvisation. Circus acts are very precise art forms and the music needs to move with the act, especially the drums – it handles much of the subtle accenting that makes the movements come to life. It was a challenge to pull together a complex show with this mix of ‘live’ orchestra and multi-track sequence arrangements. We had to be creative with the multi-track sequence so that we keep the wonderful details and textures created by composer Jonathan Lim. Even today, we still find ways to make the music better. It is – and likely will always be – a work in progress.

How ‘common’ is this style of music playing?
Erik: It’s very common – just look at Broadway and Cirque du Soleil.
Peter: I’ve done this for 20 years now.
Norbert: I’ve played for theatrical shows for 10 years but only as a sub. So playing for the same show for 7 days a week, for nearly a year is quite a new experience for me.
Bill: I’ve been doing it since high school – 7 to 12 shows a week since college. It is fun, I get to travel and so here I am! 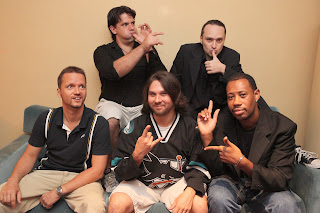 How has the journey of life changed you in the past one year?
Adam: I’ve learnt a lot – though trial and error – about technique, software, music and management. Being a Musical Director for a show this complex is a first for me. We’re all very much like family – and like any families, some squabbles are bound to happen. I believe we are all very happy with where we are at now as a band and as ‘family’. Talking about families, the biggest change is parenthood! Both Peter and I had children one month apart – Peter’s second, my first. Norbert is expecting his first child in October.
Erik: I now know to trust only God and my heart.
Norbert: This country is very different from where I came from – that means a lot of changes.
Billy: I feel more like a citizen of the world. I’ve never lived outside USA previously so it’s very different for me. I’m more aware of the goings-on in SEA and see places I’ve only dreamed of visiting.


What are noticeable changes in the troupe over the past year?
Billy: New directors, new technical directors, new cast members, some acts that we opened with have been cut – overall, there were quite some changes. The music however, has changed very little.

If you can change one thing, what will it be?
Norbert: I’ve never seen the show as the audience. Perhaps whatever changes are required to make the show better for the audience?
Billy: Have the show tour (eventually). It would be cool to bring the show to some other cities – and to experience these cities myself as well!

Any hopes for the upcoming year?
Adam: For the show to keep growing, sharing it with even more people. I would love to see the show extended or to begin a new production here in RWS. I think we have grown quite fond of all the great things Singapore has to offer. I come to work in shorts every day – I LOVE it!
Erik: To continue to help this show improve to a highly professional level.
Peter: Good health.
Billy: To grow as a musician. Outside the show, to play lots of tennis! Love the warm weather all year round – where I grew up in Upstate New York, we can’t play tennis outside during Christmas.

More about the band…
Norbert Elek – Keyboards / Accordian
– played the piano since 5 years old
– performed with many leading Hungarian pop bands
– created pop music albums, including one for the winner of the Hungarian Idol TV show
– orchestrated for the Hungarian Military Big Band and several other symphonic orchestras

Bill Leary – Saxes / Ethnic Flutes / Clarinet / EWI
– played with jazz greats in college
– toured with Broadway musical “Annie”
– travelled with a 3-ring circus – complete with elephant, lions, horses and clowns!
– sailed around the world while performing on a cruise ship

Peter Csaszar – Bass / Guitar / Cello
– a bassist in the Hungarian State Opera for 6 years
– has performed in orchestras, concerts and musicals with notable names, like Yehudi Menuhin and Diana Ross

Erik Hargrove– Drums
– performed for kings and dignitaries on every continent except Antarctica
– toured and recorded with James Brown for 7 years, Bootsy Collins for 2 years and Sister Hazel for 3 years and Thomas McClary of “The Commodores”
– has performed with names such as Michael Jackson (at the 2004 BET Awards), Sting, Pavarotti and Red Hot Chili Peppers while on tour with James Brown

Check out our websitetoo for more info on Voyage de la Vie.