I gave my intern Sara-Jean the assignment to check out the Rockafellas, our resident B-Boys in Unversal Studios and to assist me in writing a blog entry on them. Here’s what she had to say:

I have to start this post with a confession. A confession that might make the rest of this blog post seem irrelevant. But please, I beseech you, do read on. I hate dance movies. I have never watched an episode of ‘So you think you can dance’.

Well, I daresay although great dance moves excite me (think the timeless Michael Jackson and his magical moonwalk), I never bought into the idea that anyone could, (pardon the cheesiness), move my heart with their dance moves, enrapturing my senses the way a beautiful, heartfelt melody could.

Well, the day when I watched the Rockafellas rehearse was the day that I changed my mind. Before I start gushing, let me take a step back to give you the hard facts.

Just who are the Rockafellas? 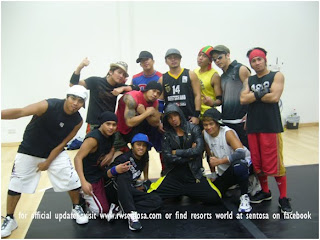 Initially when I heard the term ‘b-boy’ coupled with the terms ‘hip hop’ and ‘break dancing’, immediately I had the notions of young, teenage nubile Pharrell William-esque guys with white towels wrapped round their heads togged in fashionably baggy sports apparel. Of course this is not unlike those you see in the stuffy underpass between Esplanade and City Hall MRT station. Well, I have to stand corrected. Like the Transformers, these 12 guys definitely more than meets the eye.

Although their style can be broadly categorized into ‘Hip-hop’, the boys incorporate elements of b-boy, popping and locking, street and break dancing into their performances. Made up of 2 famous hip hop dance groups in Manila, the boys were scouted from the international auditions for Universal Studios in June last year, beating out thousands, and arrived on our terribly sunny island in November.

The Rockafellas have had at least 15 years of experience.

That’s 15 years of doing gravity defying flips on solid ground, 15 years of spinning on your head and of course 15 years of countless injuries, sweat, blood and hard work. (Makes me wonder what the hell I was doing with my life for the past 15 years…)

These boys are so good that they don’t even have to join competitions to prove their worth. In fact, the Rockafellas’ leader Maynard JUDGES competitions and they perform regularly on television in the Philippines, and are celebrities in their own right. To become a Rockafella, you would not only have to be extremely flexible and able to do those mind-boggling flips, most importantly- you must be able to dance.

Jokes aside, you would also have to go through at least four grueling of gymnastics and endurance training every day. In addition, the Rockafellas is also the only performing group in Universal Studios Singapore to choreograph their own dance moves. 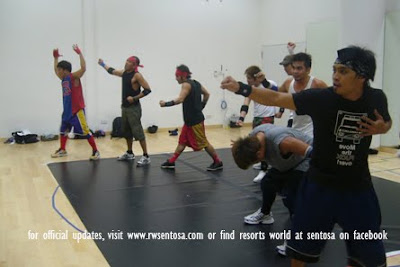 When I went to attend their rehearsals they were in the middle of their dance routine. With the Rockafellas seamlessly integrating their slick moves into the cranium-pounding hip hop soundtrack, I couldn’t help but be amazed.

I would think that having watched so many break dancing performances on TV, this would be a bore to me.  But really, sitting just half a metre away from their makeshift stage, I suddenly knew how it would feel like to have a Pikachu unleash a devastating ‘Thundershock’ on me- I was completely electrified (in a good way of course).

I am not exaggerating.

The way the guys defied every law of gravity- whirling, flipping, and spinning (sometimes narrowly missing my face), kept me gasping at every second that I might’ve appeared to resemble a goldfish more than a human being. The way floor seemed to resonate with mild tremors when they threw their toned bodies on the ground made me exclaim ‘ouch’! 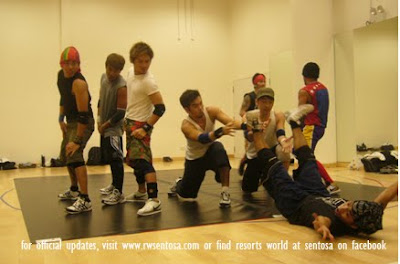 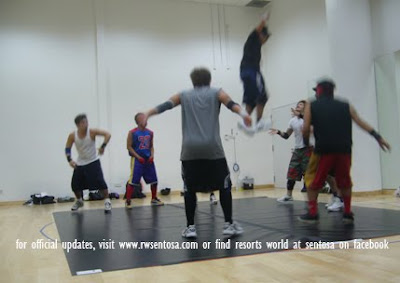 But what really, really impressed me was that throughout their entire performance, though their bodies were dripping with perspiration, their wide grins never once left their faces.

As they executed lethal dance move after dance move, they still had the energy to toy with the audience, waving cheekily at the camera and hollering with an almost child-like glee as their mates engaged each other in a ‘dance battle’.

Their love for their craft was infectious and unknowingly I began to bob along to the beat and started cheering with wild abandon when they executed a particularly tricky move. My favourite performance was one where they were like Men in Tutus but with a Hip Hop twist. It was totally hilarious but I really shouldn’t spoil it for you. It would be like trying to describe Mr. Bean- no words or descriptions could do their comic timing any justice. 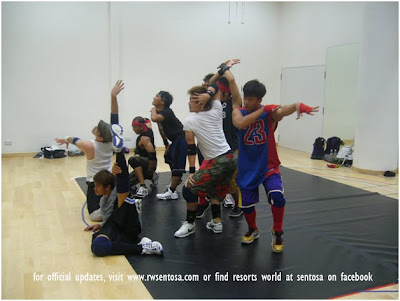 To be a good entertainer you need talent, but to be a great entertainer, you need a lot of hard work.

And I was lucky enough to watch them work behind the scenes.

|During their supposed ‘break’ they didn’t have a kit-kat or just laze around. They immediately reviewed their performances that they recorded engaging in a serious discussion on how they could be improved.

After their discussion, without delay, they launched into their own private freestyle practice, laughing and joking as they each tried out more ridiculous and crazy dance moves. Suddenly, seeing them so hard at work, I felt a warm fuzzy sensation growing in my chest.

Simple, yet words that ring true. Before this blog post reduces into a mush of gooey Chicken Soup for the Soul-like musings, let me end off with this simple sentence.