Just last week when I was on my way to work, I saw the Far Far Away castle, or for fans of the DreamWorks animation, the name of the castle is the ‘First Castle from the World of Shrek’.

It’s being built at an unbelievable speed; other than the highest turret which has been erected (measuring some 42.5m in height), the main facade is also almost completed.

For a moment, I felt like a child again, looking at the majestic castle and wondering what it beholds. Then it occurred to me that this is a part of my (world’s first) ‘office’, considering I’ll be conducting work at some point in time in the castle, be it showing the media around or talking shop with my Universal Studios Singapore colleagues. I can’t believe we’re almost coming to the end of the rainbow to find the pot of gold! 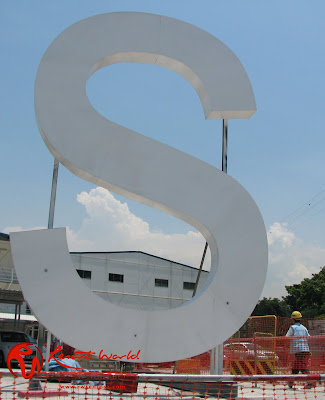 A mock-up of the ginormous lettering, which will greet visitors to Sentosa Island. This has been put out in the sun some weeks back to test the weather fastness of the paint.

The other exciting development for me is actually the constructing of the larger-than-life-sized alphabets that spell ‘Sentosa’ at the entrance of the island, which will be among the first things greeting guests when they commute to Resorts World Sentosa. The letters are humungous and I’ve seen them at the current construction site, waiting to be transported to their new home. Imagine—instead of the famous Hollywood sign that has become emblematic of the playground of the rich and the famous in Los Angeles, we’ll all be seeing ‘Sentosa’ standing proudly on our own Sentosa hill, and that’ll be another unforgettable sight to behold.

And now to continue where I left off at my previous entry, I’ll fill you in on more of Universal Studios Singapore’s exciting food offerings. Other than the 12 dining outlets, of which six are Halal certified for our muslim guests (i.e. Mel’s Drive-In, Friar’s, Goldilocks, Celebrity Café & Bakery, Oasis Spice Café and Gloria’s Snack Shack) and the many vegetarian options to cater to the diets of lacto-vegetarians, strict vegans and fruitarians alike, we also have innovatively-themed food carts too — and you heard it here first! 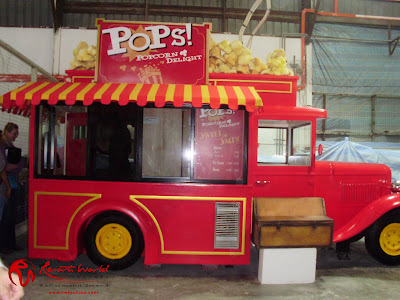 The Pops! food cart… with loads of popped delights

Instead of your usual run-of-the-mill food kiosks, some of these amazing 500-metre long fanciful food carts are actually fabricated out of automobiles and will be stationed at the respective zones of the park. They are extremely eye-catching and were creatively designed to reflect the food they serve. Like for the Pops! food cart shown in the photograph below, naturally, it spells popcorn! But not just any salted caramel or sweet-buttered popcorn, there’ll be flavours out of this world that you’ve never tried before.

In addition to this one, there’ll be a motley crew of others with quirky names like Tail of the Pup selling hot dogs and sausages; Curry Up! selling Indian pratas; Gingy’s House of Sweets selling special candy apples and Little Red’s selling smoked giant turkey legs and yummy savoury pies.

As for drinks, grab special arctic blast frozen drinks from the Antarctic Refreshments food cart and for some indulgence, sink your teeth into the extremely sinful, but mouth-watering churros first to hit Singapore, from The Churro Station food cart. Are you drooling yet?

I can already hear my tummy rumbling so while I go settle my hunger pangs, I’ll leave you to rummage your refrigerator. Expect more photos when we’re ready to release them, and so until my next entry, eat well and sleep well because you are what you eat!