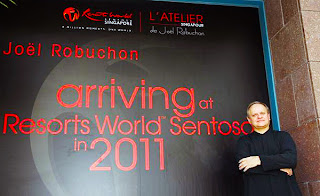 “Exhilarating” and “bliss” are just a couple of choice words to describe Chef Joël Robuchon’s food. The great Chef Robuchon is the world’s most decorated chef with  24* stars in the 2010 Michelin Guide.

It doesn’t just stop there. On top of great food, patrons can also expect a stellar team of chefs, maître d and stewards, all handpicked from his dining establishments to spearhead the three outlets.

Mr. Robuchon said: “Joël Robuchon Restaurant will be a fine dining restaurant with the quality of service of a three Michelin-star dining establishment as it currently exists in Tokyo, Las Vegas and Paris, while L‟Atelier de Joël Robuchon is a different innovative concept. It features a „convivial‟ atmosphere, where I wanted to stage the chefs in a central kitchen in full view of the guest, without any manager. The guest, seated at the counter, can see his product being transformed, everything is transparent, and he can even follow the cooking of his meat on the teppanyaki or on the spit of the rotisserie.”

If you’re not familiar with who Joël Robuchon is, just check out his list of accomplishments.