Let’s step back in time to the marvels of Ancient Egypt, a land that was one of the three oldest known human civilizations and one that till today is still cloaked with an air of mystery. It is a place of contrasts; highly fertile floodplains of the River Nile, hot and arid elsewhere; highly scientific and mathematical, yet highly superstitious; capable of humanly impossible feats of engineering, yet also condoning some of the darkest deeds of human history. It is a place of wonder. And Universal Studios Singapore will try to bring that to you.

The first of its kind in any Universal Studios theme parks in the world, the USS Ancient Egypt zone would strive to bring the enigma and awe of the exploration era of the 20th century to USS. The area is themed to look like an excavation site and the two attractions here tie in directly with that. 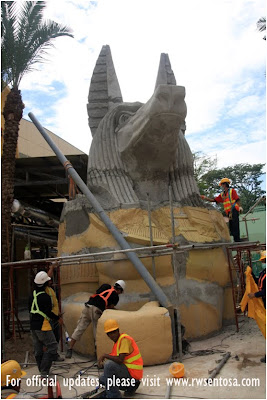 Walking into Ancient Egypt (from either Lost World or Sci-Fi City), you would immediately be confronted by the immensity of the statues holding up the collapsed entry archway. And thus setting the tone for almost everything else in Egypt, you are well advised that big is the order of the day. 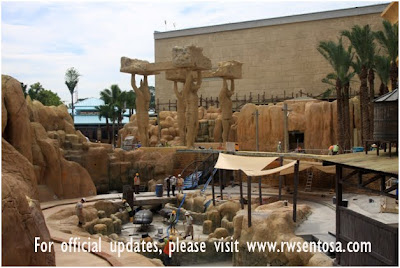 The four statues marking the boundary of the land; the Treasure Hunter is in the foreground

Along the southern section of Egypt, you will find an enormous Egyptian tomb, newly excavated and obviously have seen better days. It is the biggest building in the whole of USS so I kid you not when I said things here are mostly huge. This very impressive structure houses the equally exciting Revenge of the Mummy (RoTM) dark ride. Expect to be surprised, thrilled and awed by the experience as you twist and turn your way past flesh-eating scarabs, deadly mummies and Imhotep, the ‘Mummy’ itself. While similar to the rides from US Florida and US Hollywood, USS’ RoTM will have its own storyline and variations. And it promises to be one hell of a ride. 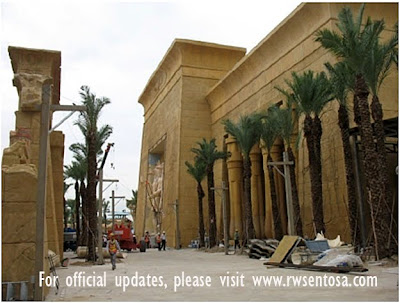 On the right, the Egyptian facade where the Revenge of the Mummy is situated – check out how small a person is compared to the size of that monument! 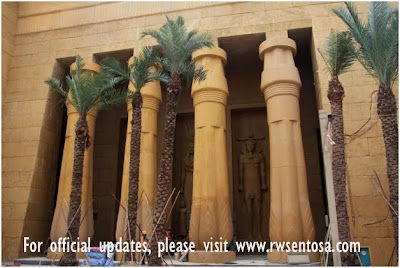 Close up of the columns to the right of the entrance

If you manage to get out alive and in one piece, drop by Carter’s Curiosities where you can get a hold of some of the excavated treasures. Looks like the archaeologists couldn’t wait to unload their discoveries. 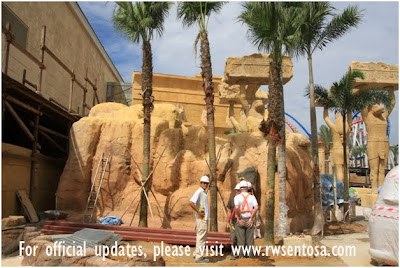 Carter’s Curiosities is right behind that rockwall

Now if you are not into thrilling coaster rides, along the northern shores of Egypt, bordering on the massive lagoon in the middle of USS, you can instead take a serene Treasure Hunters’ ride in an abandoned excavation site. Drive your jeep deep into the site while around you danger lurks in the form of wild animals and the ever deadly scarabs. Take in the treasures hastily abandoned while you wonder what made the excavators disappear without taking their findings along with them… 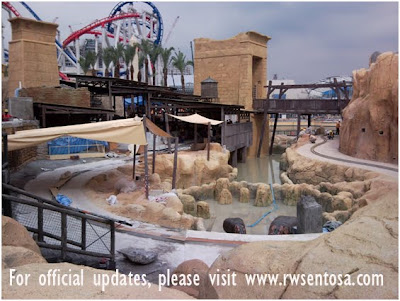 Part of the Treasure Hunters attraction – work in progress

Feeling hungry? Head towards the Oasis Spice Café, where they served food from the archaeologists’ food stores. Just kidding! Here you can find Mediterranean, Indian and Malay cuisines served buffeteria style. So this promises a varied selection of food for discerning tastes. Enjoy your meal while surrounded by intricately done Egyptian wall murals, warm lighting and a great ambience. Skylight included. 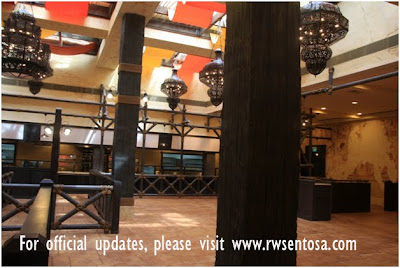 I just love the feel and ambience in the Oasis Spice Cafe, don’t you?

I’m also told there’s a building here that is of a rather mysterious sort. It looks great from the outside but no one really knows what is supposed to be inside. Some say that it is an outhouse. If it is, I’d say it is a very elaborate one at that, that’s for sure. Be sure to check it out.

Now, right beside the Café and in front of the RotM attraction, there is the Pharaoh’s Walkway leading all the way to the lagoon in the middle of USS. While not technically an ‘attraction’, this is a great place to experience, for a moment, life back in Ancient Egypt. Walk in the shadow of the towering Obelisk, flanked on both side by statues of kneeling Anubis as you head towards the viewing platform by the lagoon. There are plenty of photo opportunities with all these awesome backdrops. 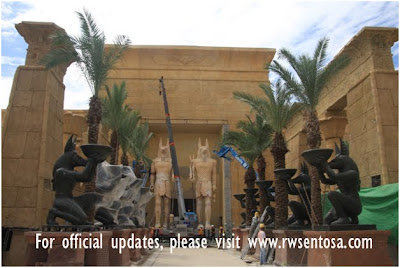 There is something for everyone here. I just cannot wait to experience all these when the park opens. I’ll be seeing you next year at USS!